In 1927, George Dewey Hay christened the show that would become radio’s longest-running musical program when he announced:

“You’ve been up in the clouds with Grand Opera; now get down to earth with us in a shindig of Grand Ole Opry!”

The Grand Ole Opry actually began 2 years earlier on November 28th, 1925 as The WSM Barn Dance (It had only been 5 years since the first commercial American radio station). The National Life and Accident Insurance Company installed a radio station on the 5th floor of their downtown Nashville office building. It was billed as a public service to the local community but financed assuming that the new medium could advertise insurance policies. The station’s call letters, WSM, stood for the company’s motto: “We Shield Millions”.

It began as a 1-hour radio showcase for country music. The public loved the program. National Life saw the potential and hired one of the nation’s most popular announcers, George D. Hay, as WSM’s first program director. Hay was a former Memphis newspaper reporter who had started a successful barn dance show in Chicago on WLS (World’s Largest Store). Hay joined the station’s staff 1 month after it went on the air. At 8 p.m. on November 28th, 1925, Hay pronounced himself “The Solemn Old Judge” (although he was only 30 years old) and launched the show that would become the WSM Barn Dance. To help set the flavor of the show, Hay employed the talents of 77-year-old championship fiddler Uncle Jimmy Thompson.

Examples of the bands featured on early shows include the Possum Hunters (with Dr. Humphrey Bate), the Fruit Jar Drinkers, the Crook Brothers, the Binkley Brothers Clod Hoppers, Uncle Dave Macon, Sid Harkreader, Deford Bailey, Fiddling Arthur Smith, and the Gully Jumpers. The first real star to emerge from the Grand Ole Opry was Uncle Dave Macon in 1926. Macon was a Tennessee banjo player who had toured the vaudeville circuit and recorded several songs.

The name Grand Ole Opry came about on December 10th, 1927. The Barn Dance followed NBC Radio Network’s Music Appreciation Hour. The show consisted of classical music and selections from opera. Their final piece that night featured a musical interpretation of an onrushing railroad locomotive. As Barn Dance opened that evening, ‘Judge’ Hay quipped, “Friends, the program which just came to a close was devoted to the classics. Doctor Damrosch told us that there is no place in the classics for realism. However, from here on out for the next 3 hours, we will present nothing but realism. It will be down to earth for the ‘earthy’.” He then introduced the man he dubbed the Harmonica Wizard — DeFord Bailey who played his classic train song “The Pan American Blues”. As Bailey finished Hay commented, “For the past hour, we have been listening to music taken largely from Grand Opera… You’ve been up in the clouds with Grand Opera; now get down to earth with us in a shindig of Grand Ole Opry!” The name stuck.

Hay’s weekly broadcasts proved enormously popular. The 5th floor radio studio became a problem due to music fans clogging the insurance company hallways to catch glimpses of their favorite performers. In 1932 National Life built an acoustically designed auditorium with seating for 500 fans and increased broadcasting power to 50,000 watts. This effectively expanded their audience to 30 states and parts of Canada. Due to the nighttime effect of AM radio, the Saturday night shows could sometimes be heard all over the country.

The new studio proved to be too small. It became clear that the crowds drawn by the radio show interfered with the insurance business and WSM needed to move away from the corporate offices. In October 1934, the Opry moved into the Hillsboro Theatre (now the Belcourt), then on June 13th, 1936, to the Dixie Tabernacle in East Nashville. As audiences continued to grow, the Opry then moved to the War Memorial Auditorium adjacent to the State Capitol. A twenty-five cent admission was charged, in part to discourage large crowds, but it didn’t work. On June 5th, 1943 the Opry found a home at the Ryman Auditorium.

The Ryman Auditorium had been built in 1892 by riverboat shipping magnate Captain Thomas Ryman as a home base for traveling evangelist, Reverend Samuel Jones. It was a religious meetinghouse just off the main street (Broadway) in downtown Nashville. The Opry would remain there for 31 years until March 16th, 1974 when it moved to the 4,400-seat Grand Ole Opry House, located nine miles east of downtown Nashville on a former farm in the Pennington Bend of the Cumberland River. The Opry still returns for an annual winter run at the Ryman Auditorium.

Many country music legends debuted and became regulars on Grand Ole Opry, including singers Ernest Tubb, Hank Williams and Patsy Cline and comedians Minnie Pearl and Archie Campbell. Pearl, with her trademark greeting of “How-Deee!” and a $1.98 price tag dangling from her hat, was an Opry regular for over 50 years. 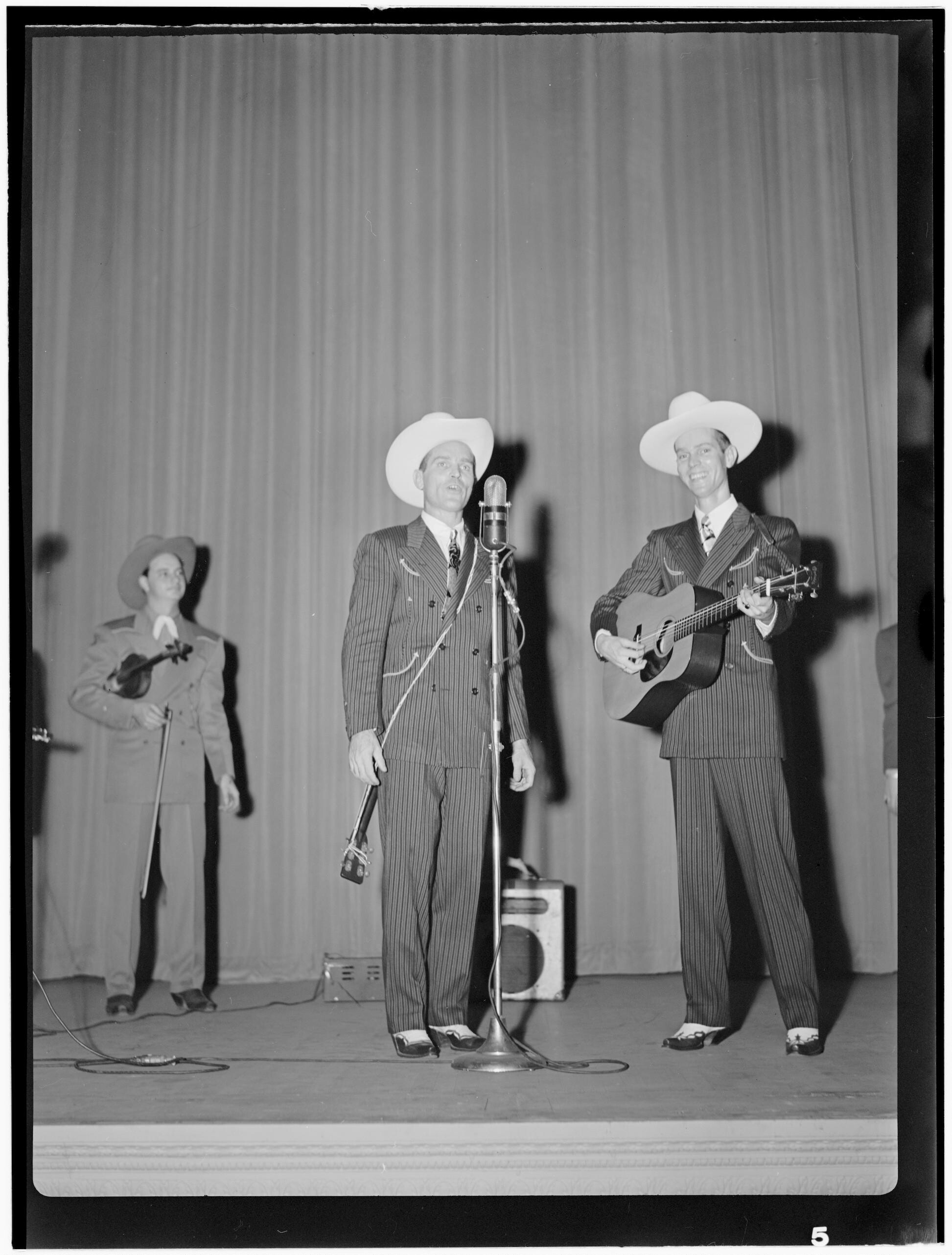 The early shows featured instrumental performances. Singers were subordinate to the bands. It changed in 1938 when young Roy Acuff joined the cast. His first performance included “The Great Speckled Bird”. A star was born and the show format permanently changed.

Throughout the 1940s, Opry stars spent weekends performing in Nashville and weekdays traveling around the nation. Early traveling performances were tent shows that later expanded into auditoriums. Performers originally traveled by automobile and later by bus. They were ambassadors for country music and the Grand Ole Opry.

In 1991, the touring tradition was revived. The Opry conducted a 10-city Grand Ole Opry Tour to celebrate the show’s 65th anniversary. Again in 2004, Vince Gill, Patty Loveless, Del McCoury, and others participated in an Opry tour. The plans for the Grand Ole Opry’s 80th anniversary include a return to Carnegie Hall and a multi-city tour: “An Evening With the Grand Ole Opry”.

On October 2nd, 1954 teenage Elvis Presley made his first and only performance on the Grand Ole Opry. The audience reacted politely to this new brand of rock’n’roll. Following the show he was told by Opry manager Jim Denny that he should go back to Memphis and his truck-driving career. Elvis swore never to return. The Grand Ole Opry represented all that was country music. Audiences did not accept Elvis because of his infusion of rhythm and blues and his infamous body gyrations. It was viewed by many as inappropriate and vulgar. It certainly was NOT traditional country music.

In the 1960s, as the hippie counterculture movement evolved, the Opry maintained its conservative image; “longhairs” were seldom featured on the show. One notable exception was the Byrds. Gram Parsons had worked with The Byrds on a country album and was allowed to perform with the band at the Ryman in March 1968. The conservative audience was polite at best.

PBS Television aired the show on March 4th, 1978 and annually through 1981. In April 1985, a half-hour segment of the Opry began airing each Saturday night on TNN as Grand Ole Opry Live. This eventually expanded to the full hour and can now be seen each week on Great American Country (GAC).

The Grand Ole Opry was inducted into the Radio Hall of Fame in 1992.

The Opry’s status as an elite fraternity of country music performers has created confusion about membership, particularly the controversy surrounding Hank Williams’ untimely death. Many people viewed the stripping of Hank Williams’ Opry membership in 1952 related to his death soon afterward (It is more plausible that his death and his loss of membership were both due to alcoholism). Opry membership is earned and must be maintained throughout the artist’s career. After artists die, they are no longer considered standing members of the Grand Ole Opry. However, they may be celebrated at special events. For example: the 50th anniversary commemorating the death of Hank Williams in 2003, featured performances from Hank Williams Jr. and Hank Williams III.

In the mid1960s Opry management decided to enforce the requirement that members had to perform on at least twenty-six shows a year in order to keep their membership active. This imposed an unreasonable financial hardship on members who made most of their income from touring. Those members could not afford to be in Nashville every other weekend. Furthermore, the Opry’s standard appearance fee remained $44 per appearance – purely a token. Though this requirement eased over the years, artists offered membership are still expected to show dedication to the Opry with frequent attendance.

The traditions of the Grand Ole Opry extended to instrumentation. The use of drums and electric instruments was discouraged. Purists believed in the traditional use of string bass for the rhythm section. Electric instruments and amplifiers were regarded as the province of rock’n’roll. It was these restrictions that reportedly kept Bob Wills from being invited into the Opry. For popular artists like Waylon Jennings, the restrictions were old fashioned, unreasonable and didn’t reflect the changing tastes of country music fans. They prevented new music from entering the hallowed halls. Restrictions were slowly eliminated. Not everyone was happy about the gradual changes but the long-term viability of the institution as a profitable enterprise required adjustments.

Management has been fastidious about enforcement of its name trademark. The Opry sued a small, now-defunct Nashville record label calling itself Opry Records. They ultimately lost the case. The record company’s attorneys successfully argued that WSM’s management did own the rights to the words: “Grand Ole Opry”, but only in that order and combination. They could not, however, own the word ‘Opry’ in isolation any more than they could own ‘Grand’ or ‘Ole’. This ruling opened the door to other small-time country music shows to brand themselves as ‘Opry’. Examples include: the Bell Witch Opry; Carolina Opry; Ozark Opry, Current River Opry, Kentucky Opry, etc.

Grand Ole Opry is still heard every week on WSM, presenting the best in country music from the past and present.

Edited and expanded by Leonard Wyeth