The early jug bands were made up of African American vaudeville and medicine show musicians. Music for entertainment — street musicians without much money. The term ‘Jug Band’ comes from building a band around some jug players. The jugs could be earth-ware or glass — as long as you could get a variety of tones, including rich low notes. There could be several jugs, played like tubas or trombones. The swoop sounds that could be made gave the impression of sliding notes (like a trombone). A good player could get two octaves out of a good-sized jug. The rhythm section could be made up of guitars and/or banjos. If real guitars or banjos were not affordable, sometimes guitars and mandolins were made from the necks of discarded guitars fastened to large gourds. The gourds would be flattened for a soundhole on one side. Banjos could be fashioned from a discarded guitar neck and a metal pie plate. The percussion instruments might be a washboard, spoons, pots, or anything homemade from common household articles. A bass made from an upside-down washtub with a broomstick and one string could be used like a slap doghouse bass fiddle. Sometimes a stovepipe was used as a sound chamber or a kazoo fashioned from a comb & tissue paper. All this was to set the stage for vocals — bawdy, funny or satirical, whatever got the best reaction from a crowd. 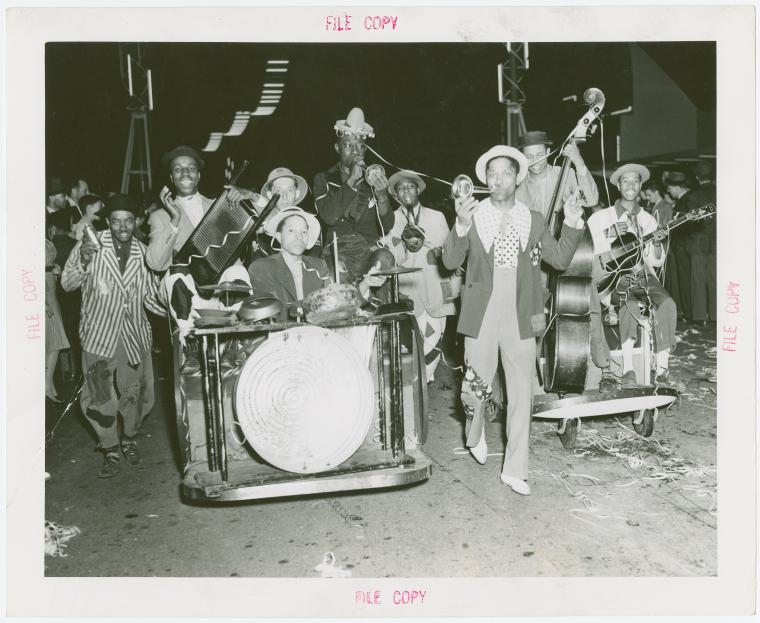 Jug Band
The music was upbeat with a strong backbeat. It was performed on street corners, Vaudeville stages, saloons, brothels or any event where comic relief made sense. It was supposed to be fun — the kind of music you just want to be able to play. It might be where the term ‘Slap-Stick’ originated. To be fair, ‘Jug Bands’ were not the only ones to incorporate all manor of homemade instruments. Bands like these were common throughout the South. The Jug Bands were built around the Jug players. If there was no Jug player, the bands had other descriptions, like skiffle bands, spasm bands or juke (jook) bands (the later was used in the same sense of the origin of the term ‘juke joint’). The type of music had a natural appeal — it was upbeat, fun, funny, danceable and often connected with intrigue, sex, savvy and alcohol. What self-respecting youth could hear something like this and not want to be involved? This may have had the wonderful effect of bringing many youths to music.

Skiffle, as a genre, had a fairly short life in the U.S. but went on to become quite influential in Britain during the 1950s.

The first published use of the term ‘Skiffle’ appeared in 1925, in the form of a band name — Jimmy O’Bryant and his Chicago Skifflers. It started to be used to refer to records of country blues music. There was a compilation called “Hometown Skiffle” in 1929, and “Skiffle Blues” (1946) by Dan Burley & His Skiffle Boys. Ma Rainey (April 26th, 1886 – December 22nd, 1939) used the term ‘Skiffle’ to describe her repertoire to rural audiences. During World War II there wasn’t much to support for light-hearted, frivolous music and the term disappeared.

Jug Bands began (as best anyone can figure) in the urban South. They music was a mixture of Memphis blues (before it was known as the ‘blues’), ragtime and jazz music. The development of jug bands is closely related to the development of the blues.

The first jug bands to record were the Louisville and Birmingham jug bands. They used the jug for its novelty. They played popular dance band jazz tunes. America’s blue yodeler Jimmie Rodgers and Vaudeville-blues singer Sara Martin both used these groups on recordings.

Will Shade’s Memphis Jug Band and Gus Cannon’s Jug Stompers recorded ‘Stealin”, ‘Jug Band Music’, ‘On the Road Again’, ‘Whoa, Mule’, ‘Minglewood Blues’, ‘Walk Right In’, and many others. These were more in a Memphis blues style.

The Depression and radio had a devastating impact on record sales, drastically reducing the output of jug band music. The last recordings by Cannon and The Memphis Jug Band were from 1930 and 1934. Will Shade and Cannon were recorded later in 1956 by Sam Charters for Folkways Records. The use of the washboard and tub bass with its distinctive sounds lasted well into the 1940s. It remained an integral part of the “Bluebird beat” in Chicago. Bukka White’s ‘Fixin’ to Die’ (recorded in Chicago in 1940) is driven by a syncopated washboard backup.

In 1958, one of the first recordings of the folk era jug band revival was by The Orange Blossom Jug Five for the Lyrichord label ‘Skiffle in Stereo’. It was also the first recording by New York folksinger Dave Van Ronk, and featured Sam Charters, author of ‘The Country Blues’,and his wife Ann as well as Len Kunstadt, co-owner of the Spivey Records label. Van Ronk would revisit the genre in 1964 with the album “Dave Van Ronk and the Ragtime Jug Stompers”. His ragtime guitar picking and choice of repertoire has influenced many subsequent jug bands. Another early recording group was Jolly Joe’s Jug Band. They were led by record collector Joe Bussard, and released on his own Fonotone label as 78 rpm records. These were eventually assembled on an LP by the Piedmont label.

The first and only time a jug band scored a number 1 hit was with Gus Cannon’s ‘Walk Right In’ was in 1963 by The Rooftop Singers. They made an appearance at the 1963 Newport Folk Festival. The song’s success brought Cannon back into the Stax Records studios in Memphis for his last recording (at age 79) the same year. The album, called ‘Walk Right In’, features Cannon on banjo and old friends Will Shade on jug and Milton Roby on washboard.

The characters from many of these bands then went on to form other bands. John Sebastian founded the pop music group The Lovin’ Spoonful and later continued as a successful solo career. Country Joe and the Fish evolved from The Instant Action Jug Band. Mungo Jerry, who had morphed from an earlier blues group Good Earth, was in effect a jug band on their first live performances and recordings. Jesse Colin Young moved to the west coast and formed The Youngbloods, whose first hit was “Grizzly Bear,” was a jug band standard. Another group with jug band roots was the Grateful Dead. Jerry Garcia, Bob Weir, and Ron “Pigpen” McKernan were in Mother McCree’s Uptown Jug Champions before forming The Warlocks – which evolved into Grateful Dead. A self-titled CD of Mother McCree’s jug band music recorded in 1964 was released in 1999. Maria Muldaur, Geoff Muldaur, David Grisman and Stefan Grossman all carried on with successful solo careers.

Pop-rock tributes to their jug band roots include ‘Willie and the Poor Boys’ by Creedence Clearwater Revival, and ‘Jug Band Music’ by The Lovin’ Spoonful. On The Lovin’ Spoonful’s first album “Do You Believe In Magic” (1965), versions of songs from the classic jug band repertoire included ‘Blues In The Bottle’, ‘Sportin’ Life’, ‘My Gal’, ‘Fishin’ Blues’, and ‘Wild About My Lovin”. Sebastian’s ‘Younger Girl’ used the melody of Gus Cannon’s ‘Prison Wall Blues’. The song ‘Do You Believe In Magic’ — a Top 10 hit – mentioned the genre in its lyrics “If you believe in magic, don’t bother to choose / If it’s jug band music or rhythm and blues / Just go and listen, it’ll start with a smile / That won’t wipe off your face no matter how hard you try.”

In 1977, The children’s Christmas special, “Emmet Otter’s Jug-Band Christmas” aired, based on a book written by Lillian Hoban and Russell Hoban, featuring a jug band composed of woodland-creature Muppets and a soundtrack composed by Paul Williams.

A documentary by Todd Kwait about the history and influence of jug band music called Chasin’ Gus’ Ghost, first screened at the 2007 San Francisco Jug Band Festival. The film features numerous well-known musicians in interviews and performances, including John Sebastian, Jim Kweskin, Geoff Muldaur, David Grisman, Fritz Richmond, Maria Muldaur, and Bob Weir of the Grateful Dead, as well as Taj Mahal as the voice of Gus Cannon. Many of these musicians performed at a sold-out concert at the San Francisco Jug Band Festival. Chasin’ Gus’ Ghost will have its film festival premiere in October 2007 at the Woodstock Film Festival.

Compiled, edited and expanded from Wikipedia and numerous sources.